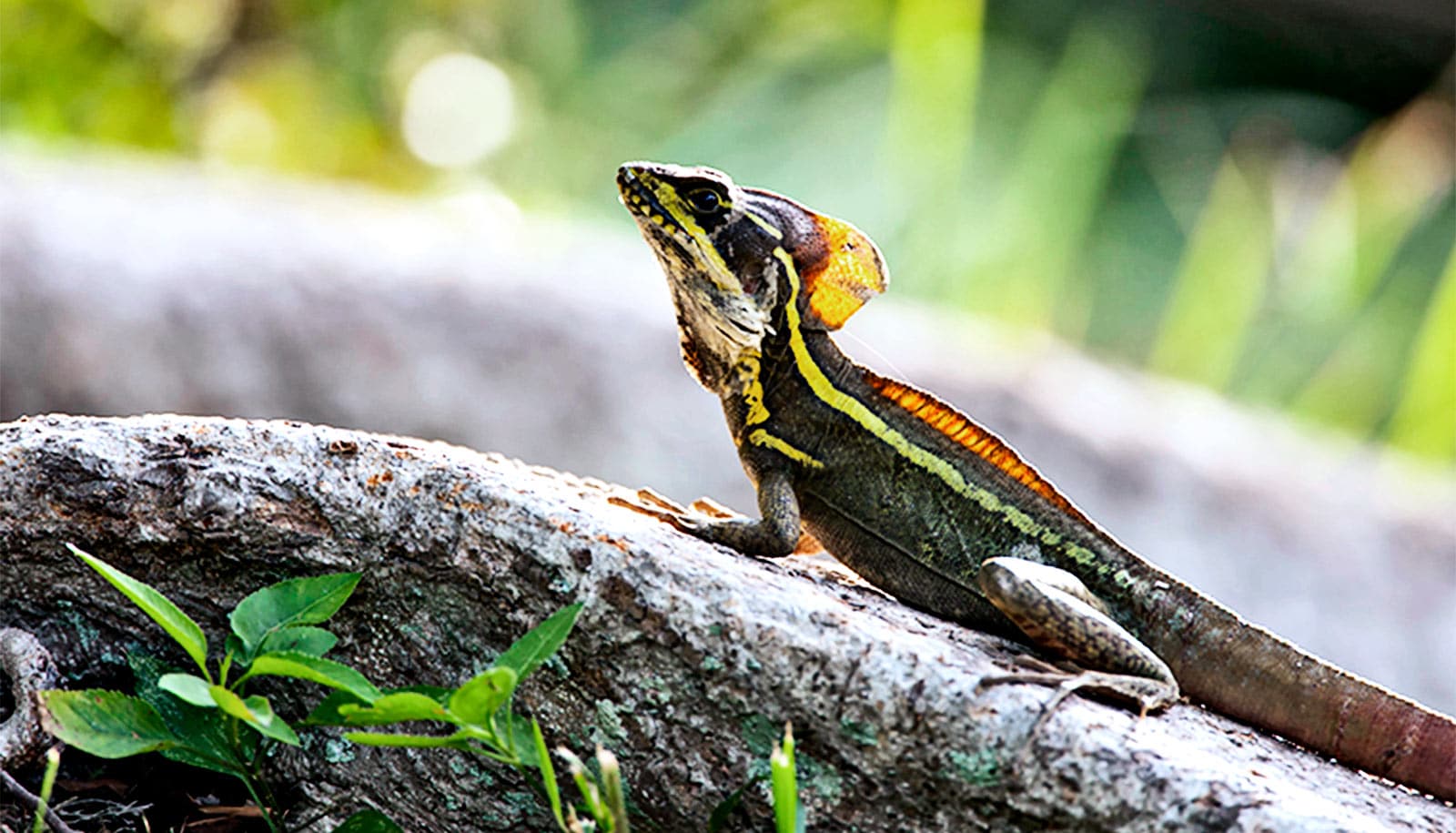 New research digs into what a cold snap in Miami that led to lizards falling out of trees can tell us about how animals can withstand climate change.

It was raining iguanas on a sunny morning.

Biologist James Stroud’s phone started buzzing early on January 22. A friend who was bicycling to work past the white sands and palm tree edges of Key Biscayne, an island town south of Miami, sent Stroud a picture of a 2-foot-long lizard splayed out on its back. With its feet in the air, the iguana took up most of the sidewalk.

The previous night was south Florida’s coldest in 10 years, at just under 40 degrees Fahrenheit. While most people reached for an extra blanket or a pair of socks, Stroud, a postdoctoral research associate at Washington University in St. Louis, frantically texted a collaborator:

“Today’s the day to drop everything, go catch some lizards.”

When temperatures go below a critical limit, sleeping lizards lose their grip and fall out of trees. From previous research, Stroud and his colleagues had learned that different types of lizards in Miami can tolerate different low temperatures, ranging from about 46 to 52 degrees Fahrenheit, before they are stunned by cold.

This cold snap provided a unique opportunity to understand how extreme climate events affect them.

But when the researchers collected the scaled survivors of that coldest night, they discovered that the lizard community responded in an unexpected way: all of them could tolerate cold temperatures down to about 42 degrees Fahrenheit, regardless of their species’ previous ability to withstand cold. The findings appear in the journal Biology Letters.

“Prior to this, and for a different study, we had measured the lowest temperatures that six lizard species in south Florida could tolerate,” Stroud says. “We realized after the 2020 cold event that these data were now extremely valuable—we had the opportunity to re-measure the same lizard populations to observe if their physiological limits had changed; in other words, could these species now tolerate lower temperatures?”

In the days that followed the January cold snap, researchers collected representatives of as many different kinds of lizards as they could find in the local area, rounding up small and large lizards and those that are active during the day and at night. Then the researchers tested their response to cold.

“A major unexpected result of this study was that all species converged on the same new, lower level of thermal tolerance,” Stroud says. “While there was great variation in temperature tolerance before the cold event—some, like the large-bodied brown basilisk, were very intolerant of low temperatures, while others like the Puerto Rican crested anole were more robust—we observed that all species could now tolerate, on average, the same lowest temperature.

“Given great variation in body size, ecology, and physiology, this was unexpected,” he says.

Only one of the species in the study is native to the area; the rest have been introduced to Florida over the past century, researchers note.

“The shifts to tolerate significantly lower temperatures that we observed were so large that we found it unclear whether natural selection was responsible,” Stroud says. “And so in our paper we discuss other alternative processes which may also have led to this pattern.”

“The results of this study are surprising and unexpected. Who would have thought that tropical lizards from places like Puerto Rico and Central America could withstand temperatures near freezing?” says Jonathan Losos, professor of biology and director of the Living Earth Collaborative at Washington University.

“What we now need to find out is how this was accomplished,” Losos says. “Is this evidence of natural selection, with those lizards that just happened to have a lower cold tolerance surviving and others freezing to death, or was it an example of physiological adjustment—termed ‘acclimation’—in which exposure to lower temperatures changes a lizard’s physiology so that it is capable of withstanding lower temperatures?”

Standing up to changing temperatures

Regardless of the underlying mechanism, the new study provides a critically important piece of information for understanding the impacts of climate change.

Events that spike temperature to extremes—both exceptionally hot and exceptionally cold episodes—will increase in frequency and magnitude. As such, it is important to understand both the effects of gradual, long-term increases in air temperatures as well as the consequences of abrupt, short-term extreme events.

“It is widely thought that tropical and subtropical species are going to be especially vulnerable to changes in temperature—particularly extreme spikes of heat or cold—as tropical areas do not typically have strong seasons,” Stroud says. “Unlike temperate species, which are adapted to summer highs and winter lows, tropical species have typically evolved in very thermally stable environments.

READ  Alphabet's New Moonshot Is to Transform How We Grow Food

“While there is no doubt that climate change represents a major threat to species and ecosystems around the world, and deserves as much research attention as possible, this study provides fascinating insight and a glimpse of hope,” he says. “Perhaps tropical and subtropical species can withstand more extreme climatic conditions than we expect.”