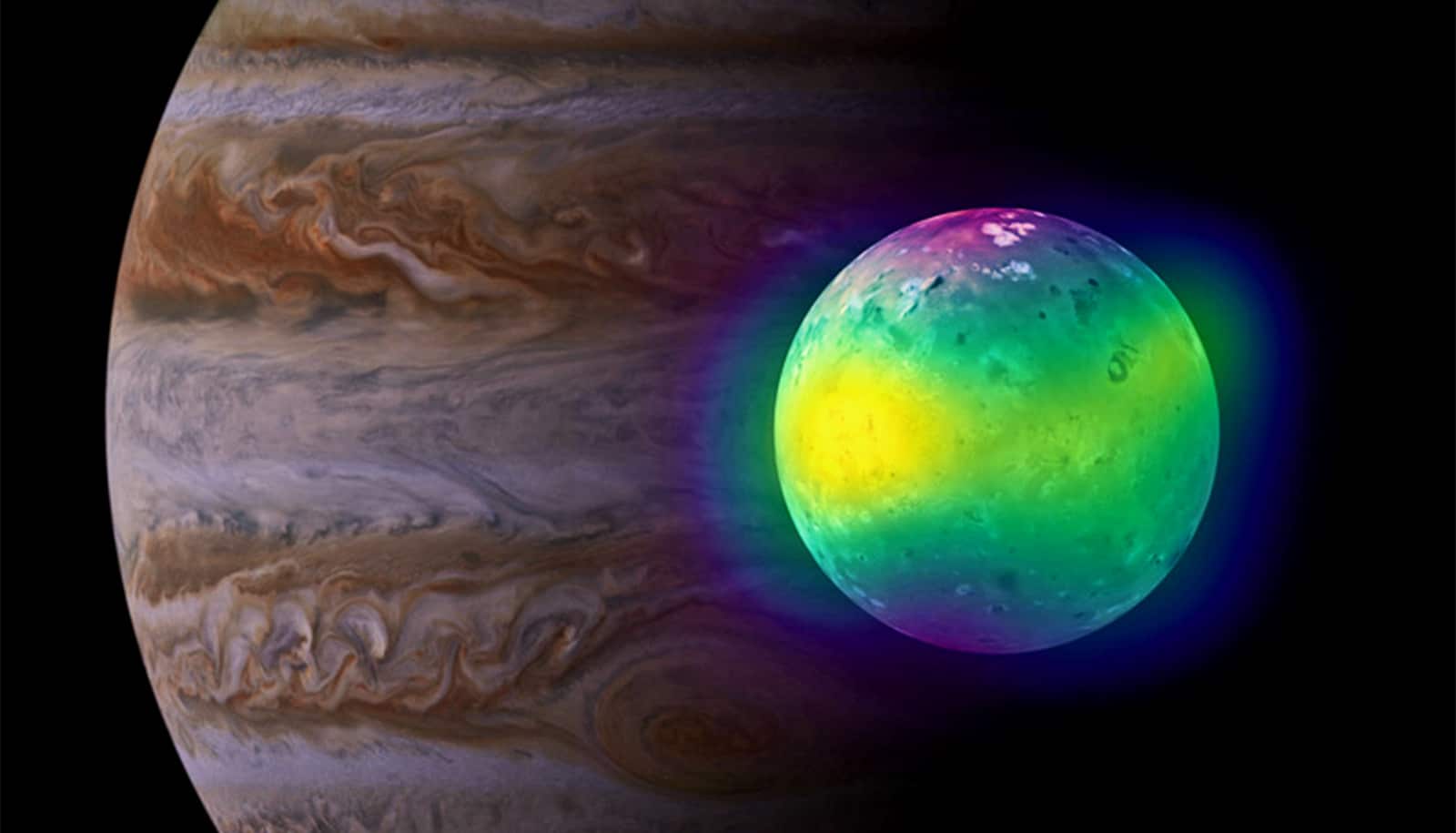 The atmosphere on Jupiter’s moon Io is a witches’ brew, composed primarily of the sulfurous exhalations of more than 400 volcanoes that dot the surface. A new study clarifies how it got that way.

Until now, it was unclear whether volcanoes spewing hot sulfur dioxide (SO2) are the main contributors to the atmosphere, or whether the main component is the accumulated cold SO2, much of which is frozen on the surface but in sunlight evaporates or sublimates into the atmosphere.

“It was not known which process drives the dynamics in Io’s atmosphere,” says Imke de Pater, a professor of the graduate school in the departments of astronomy and of earth and planetary science at the University of California, Berkeley. “Is it volcanic activity, or gas that sublimates from the icy surface when Io is in sunlight? What we show is that, actually, volcanoes do have a large impact on the atmosphere.”

As the most volcanically active moon in our solar system, Io (“EYE oh”) provides a laboratory for exotic environments unlike anything on Earth. And since we’re unable to probe inside Io, the atmosphere—about a billion times thinner than Earth’s atmosphere—provides a window into the moon’s roiling interior and the internal magma reservoirs feeding the volcanoes.

With no nearby satellite currently observing the moon—NASA’s Juno mission focuses primarily on Jupiter and will end next July—astronomers like de Pater must rely on Earth-based telescopes to probe the atmosphere. She has observed Io’s atmosphere for 30 years with radio telescopes like the Atacama Large Millimeter/submillimeter Array (ALMA) in Chile, and optical and infrared telescopes, primarily the Keck telescopes in Hawaii.

One surprise from the new observations is that the atmosphere becomes dramatically unstable when Io passes through Jupiter’s shadow every 42 hours as it orbits the planet.

In a paper accepted for publication in the Planetary Science Journal, de Pater and colleagues report that the radio emissions from sulfur dioxide (SO2) gas dropped exponentially as Io was eclipsed by Jupiter on March 20, 2018, indicating that the lower atmosphere—below 10 to 20 kilometers (6.2 to 12.4 miles) in altitude—essentially collapsed, quickly freezing out onto the surface.

Although Io’s surface is always cold—about 150 degrees Celsius below freezing, or -230 F—a further drop in temperature by a few tens of degrees, down to -270 F, brings the temperature below the freezing point of SO2.

As the moon re-emerged from Jupiter’s shadow during observations on September 2 and 11 in 2018, the cold sulfur dioxide emissions returned within about 10 minutes.

“As soon as Io gets into sunlight, the temperature increases, and you get all this SO2 ice subliming into gas, and you reform the atmosphere in about 10 minutes’ time, faster than what models had predicted,” de Pater says.

She notes that not all the cold SO2 froze out as the temperature dropped in Jupiter’s shadow. During the eclipse, in addition to abundant SO2 gas over some volcanoes, ALMA also detected low levels of SO2 globally in Io’s atmosphere, suggesting that many unseen volcanoes—so-called stealth volcanoes, because they emit no smoke or other particulates that can be easily seen—are constantly spewing SO2 into the atmosphere that remains too warm to condense.

There were also hints of stealth volcanism in observations de Pater and her colleagues reported in July, based on Keck observations. They saw widespread sulfur monoxide (SO) gas in the atmosphere—not, as expected, only over active volcanoes. As de Pater shows in her new paper, the SO as seen with ALMA is likely produced when sunlight breaks the sulfur-oxygen bond in SO2 that has been ejected hundreds of kilometers above the surface.

“The SO2 that we see with ALMA when Io is in eclipse is at a very low level, and we can’t say if that is stealth volcanism or caused by SO2 not completely condensing out,” she says. “But then, when we looked at the SO with Keck, we can only explain the SO emissions, which are widespread on the surface, through this stealth volcanism, because excitation of the SO requires a very high temperature.”

With such a thin atmosphere, Io is exposed to the cold of space, as well as to the hot plasma around Jupiter. The tidal tug that Jupiter and two of its largest moons, Ganymede and Europa, exert on Io heats the moon’s interior, creating the volcanoes that bathe the surface in hot sulfur dioxide fumes. Io’s largest volcano, Loki Patera, spans more than 200 kilometers (124 miles).

The volcanic SO2 eventually condenses on the surface to form a thick frozen layer of sulfur dioxide ice, recently mapped globally by de Pater and her colleagues. This frozen SO2, often overlain by a layer of volcanic dust, is what gives Io its characteristic yellow, white, orange, and red colors.

Though the dominance of SO2 in Io’s atmosphere was well known—de Pater was a member of the first team to observe global SO2 in 1990—it was still unclear whether recently emitted hot SO2 or sublimation from the accumulated SO2 ice (referred to as cold SO2) dominated the atmosphere.

To disentangle the contributions of hot and cold SO2, de Pater and colleagues, including Statia Luszcz-Cook from Columbia University in New York and Katherine de Kleer of California Institute of Technology, chose to observe Io during its transition from sunlight into darkness during an eclipse and again when it re-emerged into the light from eclipse. Because of the alignment of Io and Earth relative to Jupiter, it’s impossible to observe both entry and exit of Jupiter’s moon from the same eclipse, so the two observations took place six months apart.

“When Io passes into Jupiter’s shadow, and is out of direct sunlight, it is too cold for sulfur dioxide gas, and it condenses onto Io’s surface. During that time, we can only see volcanically-sourced sulfur dioxide. We can, therefore, see exactly how much of the atmosphere is impacted by volcanic activity,” Luszcz-Cook says.

Thanks to ALMA’s exquisite resolution and sensitivity, the astronomers could, for the first time, clearly see the plumes of SO2 and SO rise up from the volcanoes, two of which—Karei Patera and Daedalus Patera—were erupting in March, while a third volcano was active in September. Based on the snapshots, they calculated that active volcanoes directly produce 30% to 50% of Io’s atmosphere.

“We see KCl in volcanic regions where we do not see SO2 or SO,” says Luszcz-Cook. “This is strong evidence that the magma reservoirs are different under different volcanoes.”

“By studying Io’s atmosphere and volcanic activity, we can understand more about the volcanoes, the tidal heating process, and Io’s interior,” de Kleer says.

De Pater and colleagues also hope to observe Io at other radio wavelengths that can probe several inches below the surface, potentially revealing the content and temperature of the magma underlying the volcanoes.

A big unknown remains the temperature in Io’s lower atmosphere. In future research, the astronomers hope to measure this with ALMA.

“To measure the temperature of Io’s atmosphere, we need to obtain a higher resolution in our observations, which requires that we observe the moon for a longer period of time. We can only do this when Io is in sunlight, since it does not spend much time in eclipse,” says de Pater.

“During such an observation, Io will rotate by tens of degrees. We will need to apply software that helps us make unsmeared images. We have done this previously with radio images of Jupiter made with ALMA and the Very Large Array.” 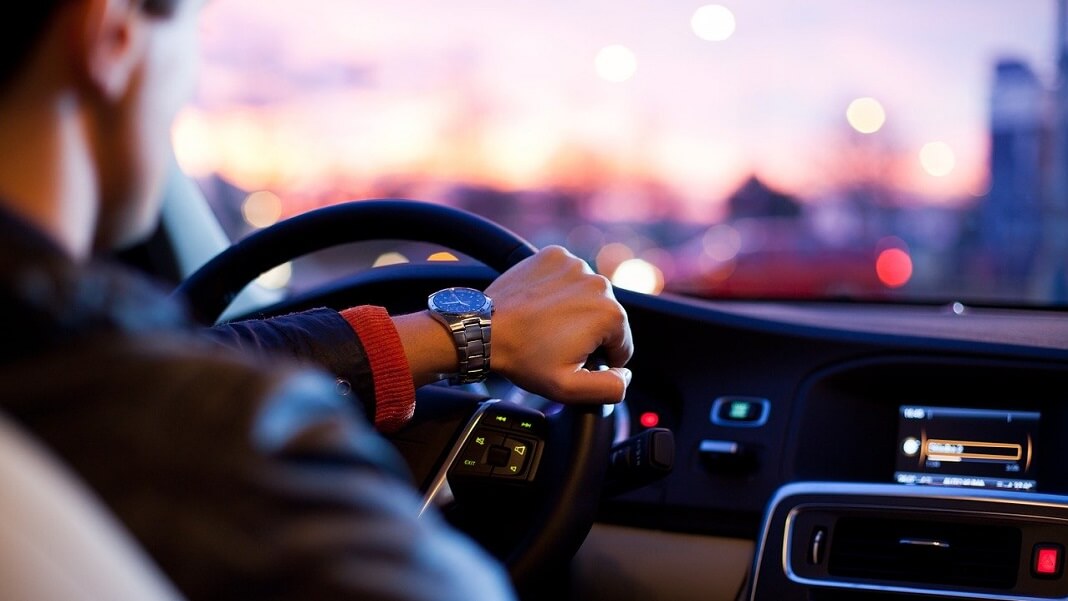