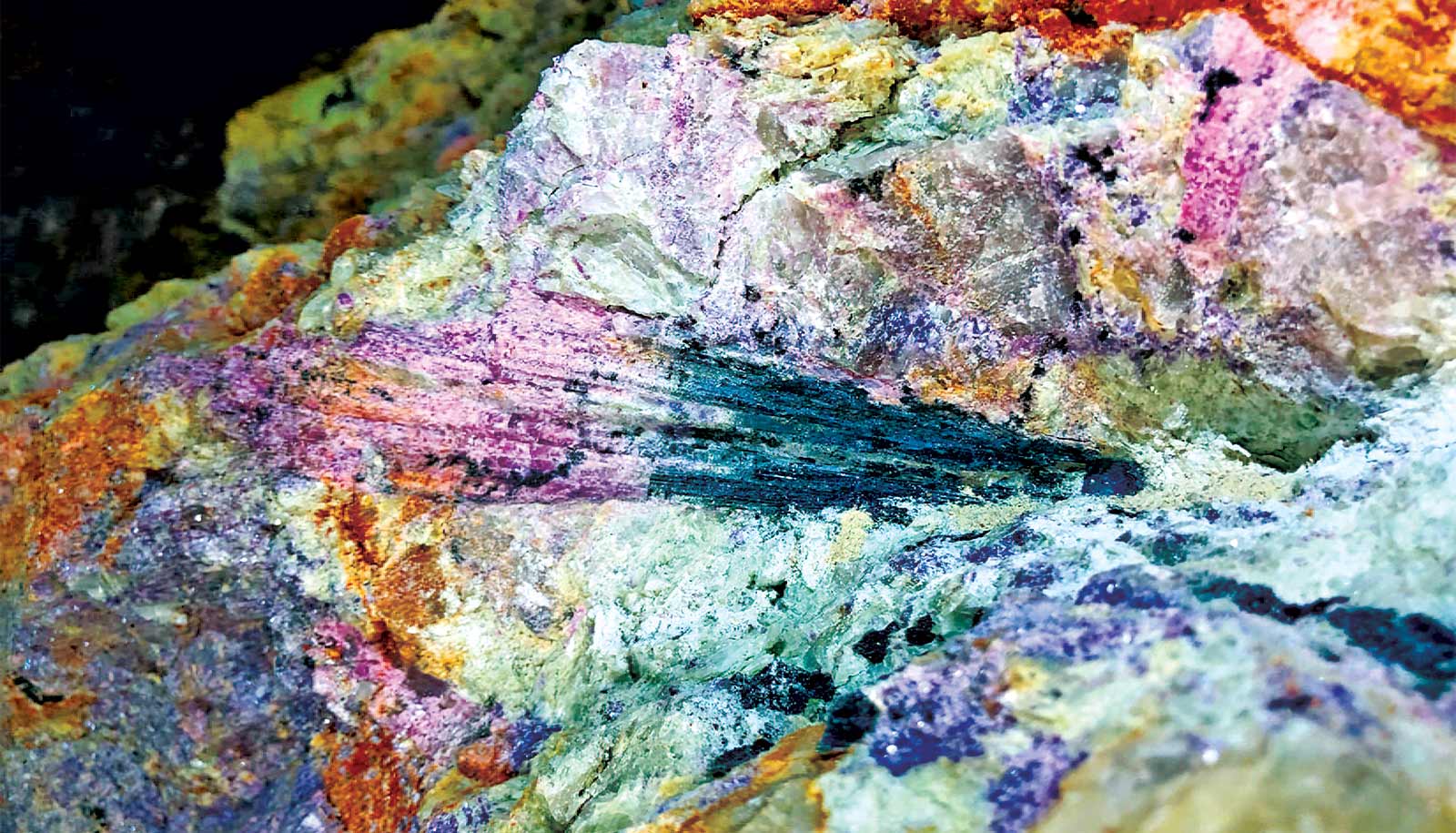 In some cooling magmas, crystals can grow up to a yard in just one day, according to a new study.

Aquamarine, emerald, garnet, zircon, and topaz are but a few of the crystalline minerals found mostly in pegmatites, veinlike formations that commonly contain both large crystals and hard-to-find elements like tantalum and niobium.

Another common find is lithium, a vital component of electric car batteries.

“This is one step towards understanding how Earth concentrates lithium in certain places and minerals,” says Patrick Phelps, a graduate student at Rice University and coauthor of the paper in Nature Communications. “If we can understand the basics of pegmatite growth rates, it’s one step in the direction of understanding the whole picture of how and where they form.”

Pegmatites form when rising magma cools inside Earth. They feature some of Earth’s largest crystals. South Dakota’s Etta mine, for example, features log-sized crystals of lithium-rich spodumene, including one 42 feet in length in weighing an estimated 37 tons.

The research attempts to answer a question that has long vexed mineralogists: How can such large crystals be in pegmatites?

“In magmatic minerals, crystal size is traditionally linked to cooling time,” says Cin-Ty Lee, professor of geology and chair of the earth, environmental, and planetary sciences department at Rice. “The idea is that large crystals take time to grow.”

Magma that cools rapidly, like rock in erupted lavas, contains microscopic crystals, for example. But the same magma, if cooled over tens of thousands of years, might feature centimeter-sized crystals, Lee says.

“Pegmatites cool relatively quickly, sometimes in just a few years, and yet they feature some of the largest crystals on Earth,” he says. “The big question is really, ‘How can that be?’”

How fast do crystals grow?

When Phelps began the research, his most immediate questions were about how to formulate a set of measurements that would allow him, Lee, and coauthor Douglas Morton of the University of California, Riverside to answer the big question.

“It was more a question of, ‘Can we figure out how fast they actually grow?’” Phelps says. “Can we use trace elements—elements that don’t belong in quartz crystals—to figure out the growth rate?”

It took more than three years, a field trip to gather sample crystals from a pegmatite mine in Southern California, hundreds of lab measurements to precisely map the chemical composition of the samples, and a deep dive into some 50-year-old materials science papers to create a mathematical model that could transform the chemical profiles into crystal growth rates.

Pegmatites form where pieces of Earth’s crust are drawn down and recycled in the planet’s molten mantle. Any water that’s trapped in the crust becomes part of the melt, and as the melt rises and cools, it gives rise to many kinds of minerals. Each forms and precipitates out of the melt at a characteristic temperature and pressure. But the water remains, making up a progressively higher percentage of the cooling melt.

“Eventually, you get so much water left over that it becomes more of a water-dominated fluid than a melt-dominated fluid,” Phelps says. “The leftover elements in this watery mixture can now move around a lot faster. Chemical diffusion rates are much faster in fluids and the fluids tend to flow more quickly. So when a crystal starts forming, elements can get to it faster, which means it can grow faster.”

Crystals are ordered arrangement of atoms. They form when atoms naturally fall into that arranged pattern based on their chemical properties and energy levels. For example, in the mine where Phelps collected his quartz samples, many crystals had formed in what appeared to be cracks that had opened while the pegmatite was still forming.

“You see these pop up and go through the layers of pegmatite itself, almost like veins within veins,” Phelps says. “When those cracks opened, that lowered the pressure quickly. So the fluid rushed in, because everything’s expanding, and the pressure dropped dramatically. All of a sudden, all the elements in the melt are now confused. They don’t want to be in that physical state anymore, and they rapidly start coming together in crystals.”

To decipher how quickly the sample crystals grew, Phelps used both cathodoluminescence microscopy and laser ablation with mass spectrometry to measure the precise amount of trace elements that had been incorporated into the crystal matrix at dozens of points during growth. From experimental work done by materials scientists in the mid-20th century, Phelps was able to decipher the growth rates from these profiles.

“There are three variables,” he says. “There’s the likelihood of things getting brought in. That’s the partition coefficient. There’s how fast the crystal is growing, the growth rate. And then there’s the diffusivity, so how quickly elemental nutrients are brought to the crystal.”

Phelps says the fast growth rates were quite a surprise.

“Pegmatites are pretty short-lived, so we knew they had to grow relatively fast,” he says. “But we were showing it was a few orders of magnitude faster than anyone had predicted.

“When I finally got one of these numbers, I remember going into Cin-Ty’s office, and saying, ‘Is this feasible? I don’t think this is right,’” Phelps recalls. “Because in my head, I was still kind of thinking about a thousand-year time scale. And these numbers were meaning days or hours.

“And Cin-Ty says, ‘Well, why not? Why can’t it be right?’” Phelps says. “Because we’d done the math and the physics. That part was sound. While we didn’t expect it to be that fast, we couldn’t come up with a reason why it wasn’t plausible.”